You can find on this page the Cairo metro map to print and to download in PDF. The Cairo metro map presents the network, zones, stations and different lines of the metro of Cairo in Egypt.
Cairo metro network is the most rapid and efficient means of transport to travel from one part of the city to another (see Cairo metro map). It is very popular with the locals despite being overcrowded during peak hours. 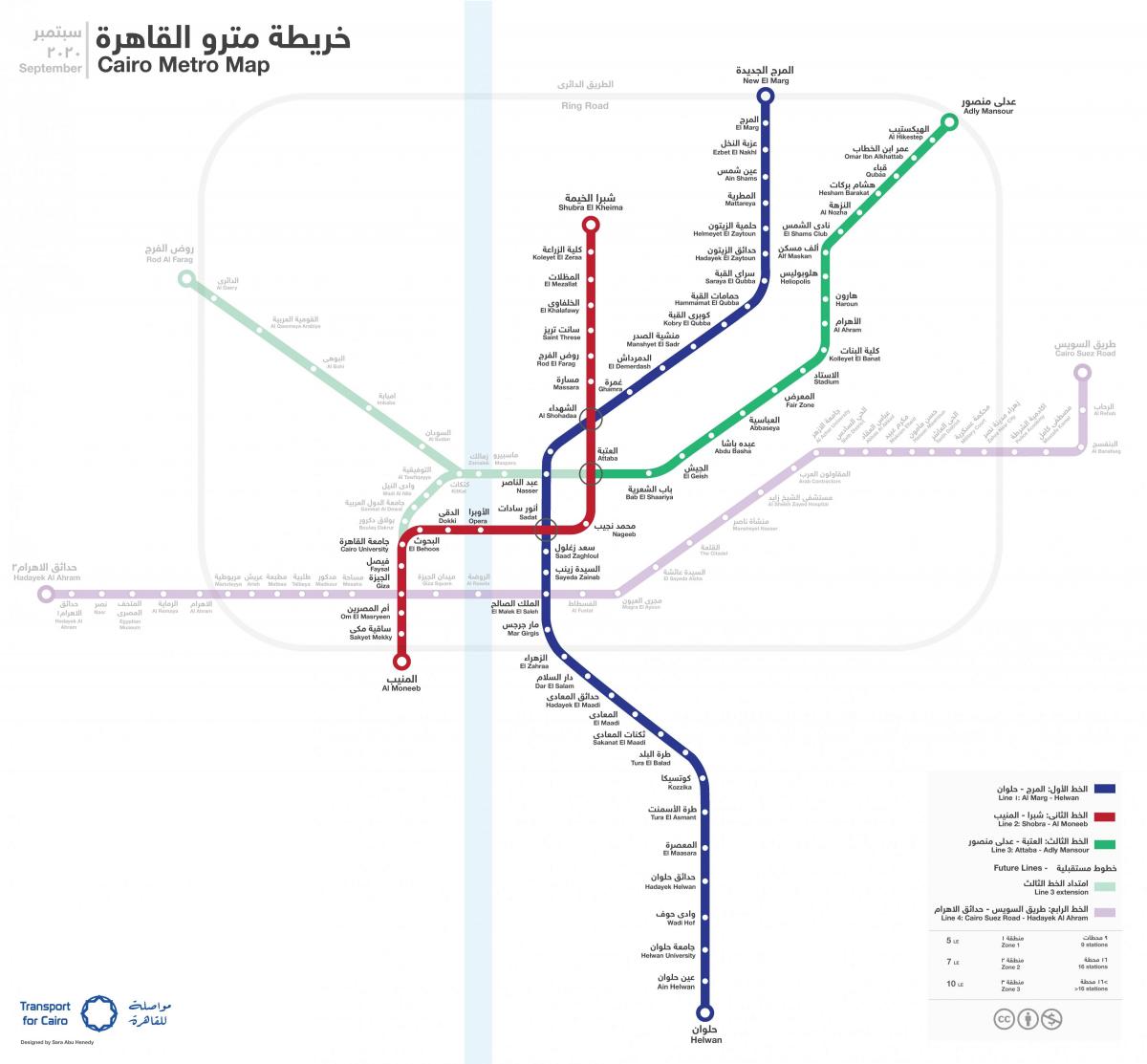 The Cairo Metro (Arabic: مترو أنفاق القاهرة) in Egypt is the first of only two full-fledged metro systems in Africa, and the Arab World. The system consists of three operational lines. The metro is run by the National Authority for Tunnels. The lines use standard gauge (1435 mm) as its shown in Metro map Cairo. The ticket price is EGP 1.00 for each journey (about GBP 0.12, EUR 0.14, or USD 0.18, average exchange rate for May 2010), regardless of distance. On all Cairo metro trains, the middle two cars (4th and 5th) of each train are reserved for women (the 5th car becomes a mixed use after 21:00). These cars are used as an option for women who do not wish to ride with men in the same car; however, women can still ride other cars freely. As of 2011, the metro carried nearly 4 million passengers per day.

As the biggest and most densely populated city in Africa, and the Arab World, the case for a metro in Cairo was strong. In 1987 that population stood at 10 million residents, not counting the two million or so commuters who came into Cairo every day to work. The idea of a metro was first thought of in the 1930s by the Egyptian engineer Saiyed Abdel Wahed who was working at the Egyptian Railway Authority, however, the idea did not progress. Following the Egyptian Revolution of 1952, there was renewed interest in the idea. In 1954 French experts made a report about the future of the transportation in Egypt. They proposed a metro encompassing two lanes, one 12 km long lane connecting Bab al-Louq and Ismailia and a second 5 km lane connecting Boulaq and Abou al-Ela Castle as you can see in Metro map Cairo. They also proposed that there should be one company in charge of all transportation systems.

The metro lines, which have been in operation since 1987, are expanded each year as the city expanded and nowadays have a large network covering almost the whole city. You can travel around in the fastest way by using the metro line which has 61 stations, 3 of which are transfer stations as you can see in Metro map Cairo. Metro tickets in all directions are charged at 2 EGP (2019). 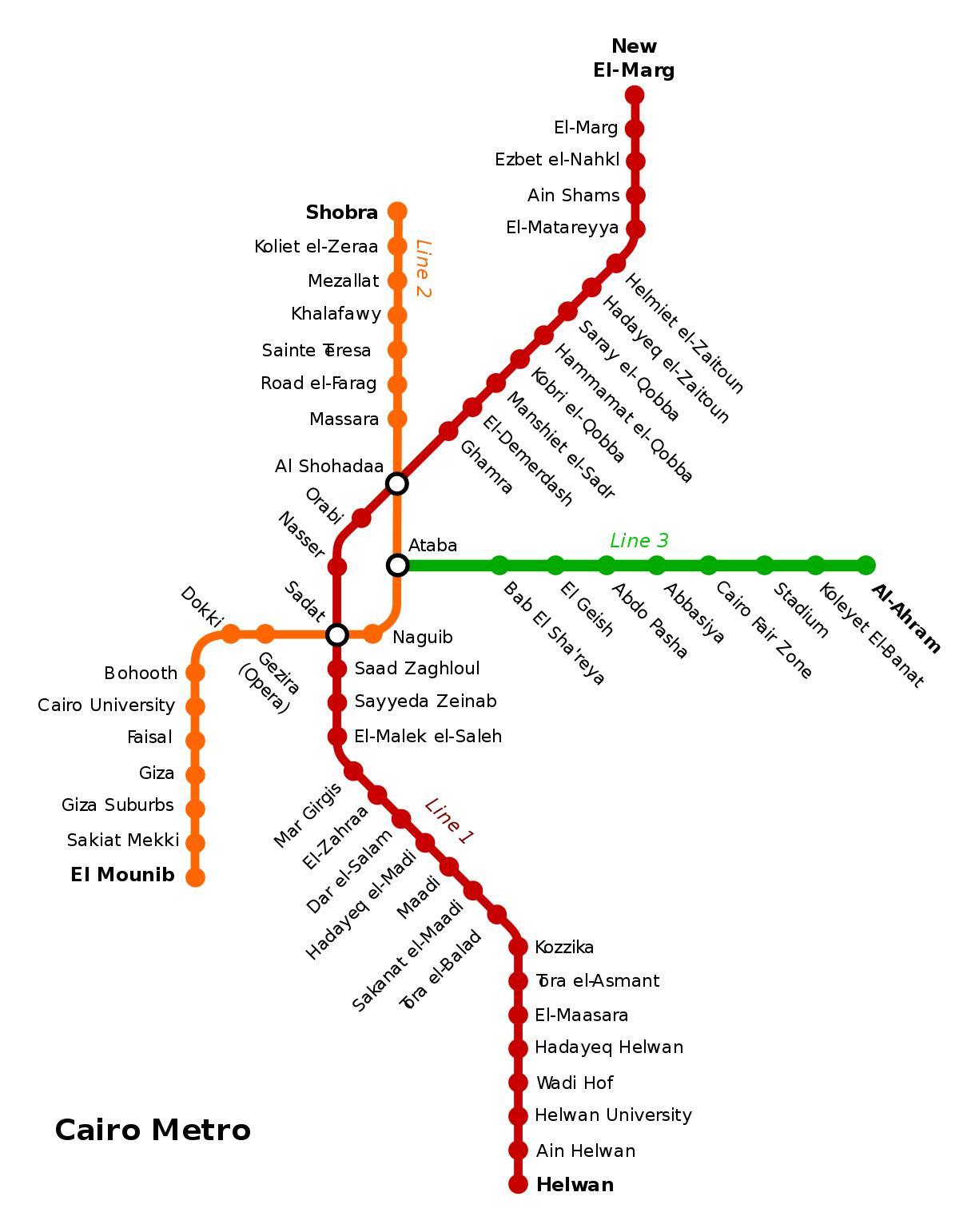 Cairo subway Line 1 is the first line of the Cairo Metro. Its first stage was opened to the public in 1987 and it was fully completed in 1989 connecting Helwan with El Marg and consisting of 33 stations with a total length of 43 km, of which 4.5 km are underground as its shown in Cairo subway map. The line witnessed few developments since 1989, New El Marg station was added in 1999 to the northern end of the line, bringing its total length to 44.3 km. Helwan University station was built between Wadi Houf and Ain Helwan stations. The line now consists of 35 stations. This line carries trains with 3 Units (9 wagons), which have a time difference of 2.5 minutes and a maximum speed of 100 km/h. The line can carry 60,000 passengers per hour in each direction.

Cairo subway Line 2 is the second line of the Cairo Metro extending 21.6 kilometres (13 mi) of which 13 km in tunnels and 20 stations of which 12 station are underground. Cairo subway network was greatly expanded in the mid-1990s with the building of Line 2 (yellow), from Shoubra El Kheima to Cairo University, with an extension to Giza as you can see in Cairo subway map. It is the first line in history to have a tunnel going under the Nile. The tunnel under the Nile is 8.35 m in internal diameter and was constructed using two Herenknecht bentonite slurry shield TBMs, which are 9.43 m in diameter. It is sometimes called the "Japanese-Built Line". It is mostly in bored tunnel, with two exceptions: a short section at the northern end approaching Shubra El Kheima which is elevated, and a section just south of this by cut-and-cover. The main difference between Lines 1 and 2 is that Line 1 uses an overhead line while Line 2 uses the third-rail system.

Cairo subway Line 3 presently operates from Attaba to Abbassia, with construction under way for the remaining line to the northeast at Heliopolis and eventually Cairo International Airport. The line crosses under the two branches of the River Nile, as does Line 2 as its mentioned in Cairo subway map. The total length of the line is approximately 30 kilometres (19 mi) most of which is in bored tunnel and will be implemented in four phases. The project includes a main workshop adjacent to the western terminal of the line and a light repair workshop at the middle of the line at Abbasia. Cairo subway Line 4 (Construction to begin September 2012) is planned to run from Haram District reaching the New Cairo district literally connecting Greater Cairo from West to East.